Your session will expire in 0 minutes.

Saturday, Feb 4, 2023 was a great day to be on the Woodbine Tiger Speech team! Every student received at least one rating of three one ratings. Of five events three received all ones.

Readers Theater performed “The Ballad of Red Dog” by Jack Stokes receiving three ones. Participants were Lane V., Micah S., Alex M., Rebecca Y., Meredith S., Bryson B., Marcus H., Leena J., and Reagan C. In Ensemble Acting, Sierra L.and Amanda N. had the judges laughing with their performance of “Lost” by Mary Louise Wilson. These two also came away with all three judges giving them a one rating.  Leah C. also had her audience laughing with her short film, “Leah’s Short Film”. Leah’s animated film was written, produced, and voiced by herself. The judges saw her obvious talent giving her ones all the way around. Leah was also congratulated by the IHSSA director, Stacy Hansen, for her ratings, especially given the fact that this was her first year at speech as a freshman. The two group improvisations received two ratings. One group was Leena J. and Bryson B. The other group included Micah S., Meredith S., and Marcus H. 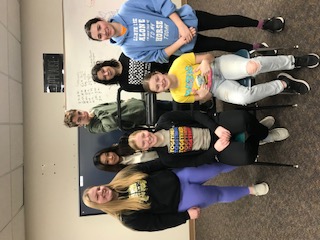